The 3 ways in AMODIT to define deadline for a case:


I want to describe last option a little more. To define such deadline choose option from toolbar: 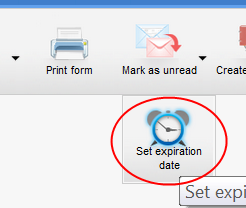 Cases with exceeded deadlines will be shown at the top of case list and marked red.

AMODIT has one very nice feature that allows to print a case form. In most cases it is enough. But what should you do when you want to present or print the case form in more nicer or custom way? The answer is quite simple - just use MS Office documents (i.e. Word or Excel) as templates.

To accomplish this goal you should create your custom MS Office document (I will use a Word document as an example in this post) and attach it to a procedure definition in AMODIT. The following picture shows a few important steps you need to do while editing document templates. 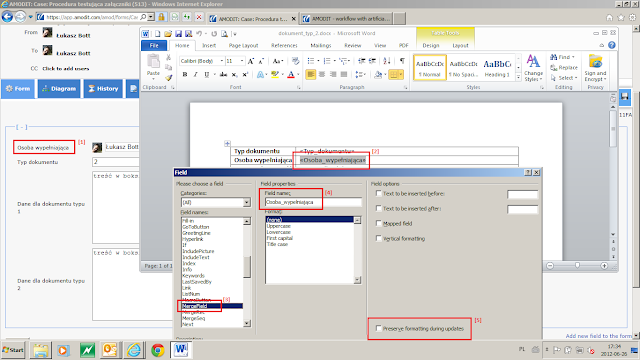 These steps are:
[1] Create a case form in AMODIT. The fields may be of different types and using national characters for their names is not a problem.
[2] Create your own custom MS Office document with placeholders inside. The placeholders will contain fields values from the AMODIT case form.
[3] For each placeholder in the text insert a merge field.
[4] The merge field name should correspond to the AMODIT case field. It is important to replace spaces in the merge field name with underscores.
[5] One more thing you should do is to uncheck "Preserve formatting during updates" option.

When you click and open the attached document template ([7]) you should see your custom Word document fulfilled with the data from the AMODIT case form ([8]).
Author: Unknown at 6:21 PM No comments:

Recently AMODIT was equipped with 2d barcodes support. To add it to a form you simply create a field of a type "Barcode". Then you can define from what fields values are to be taken to generate a barcode. For example "[VendorID] [ProductId]" means to get values from two mentioned fields divided by blank, and generate code from it.

You can then use this code to quickly input data from code to other system. Or just generate code with case ID and then use it to find electronic version on a basis of the printed code.

Now Aztec codes are supported but shortly we will add other codes like 1D and QR.

Below you can see example of code generated from a field [Company]. 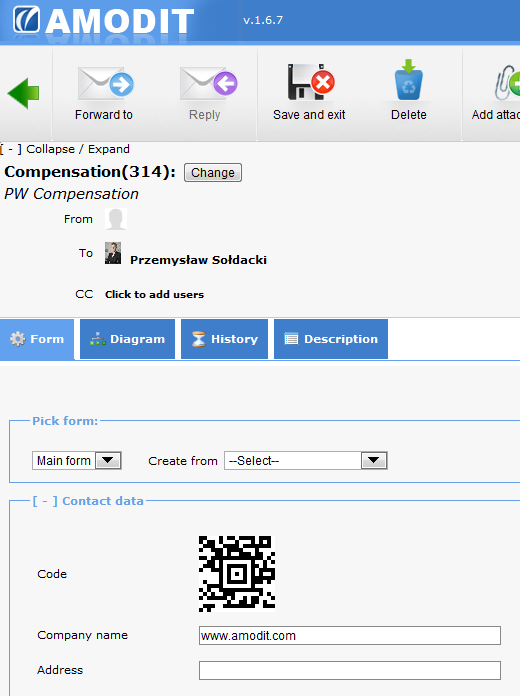 Codes are certainly visible on printed version too: 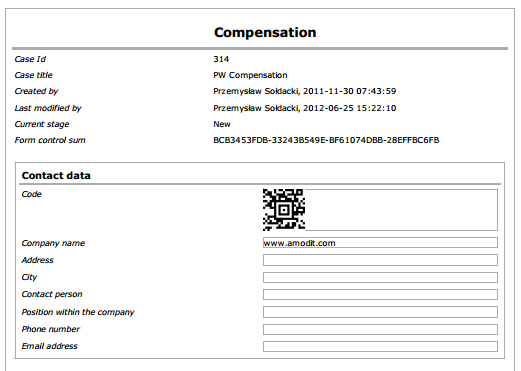 AMODIT can use two types of authentication:


Second type is usually used when customer already has AD. It gives "single sign on" and many security policies. For the first type of authentication those options were very limited, till now.
Now AMODIT is checking for strenght of password, so it has to contain at least one small letter, one capital letter, one digit and one special character. Administrator can also define minimal length of password (8 by default).
Furthermore, administrator can define number of day password is valid. Then it expires and user has to select new one.

This functions give proper level of security also for internal AMODIT account.
Author: Unknown at 5:18 PM No comments:

One of principles of AMODIT is to make it as easy as possible. You can start using workflow in a few minutes and end users can propose new procedure giving it just a name and names of possible stages.
However, later some procedures get more mature and stable and we want to add some automation. This is why AMODIT is equipped with rules engine and special scripting language. Syntax is similar to C#, but is simplified. For example there are no loops, not to let user a chance to make infinite loop.

But we assume that AMODIT users don't have to be experienced programmers and they can forget about semicolons. So compiler is trying to guess if there should be a semicolor and put it there itself. Thus previous example can be simply writtten as:

Another thing that is made simple is referring to form fields. Generally if you want to refer to a field you use its name in square brackets:

However, there are some functions which perform special actions with fields. For example SignField(field,comment) function puts a signature into a sign field. First parameter is a name of a field (not its value) so you have to put is as a string:
SignField("field1","my comment");

From syntax point of view it is error. But it is common error and we decided to make compiler smarter.
So now you can use all combinations:


Just the first one is really valid, but all others are tollerated because compiler can clearly recognize user's intention. And this is what I call "error tolerant programming"!

POLATOM is Radioisotope Centre, part of National Centre for Nuclear Research. Polatom deployed AMODIT to support workflow processes, f.e.: gathering opinions and workshop orders. There are plans to deploy more processes and it will be done in cycles.
This deployment was connected with deployment of intranet, based on Microsoft Office SharePoint Server 2010. Both systems were integrated and AMODIT is now integral part of intranet. Look&feel is the same. From users perspective it is one of intranet sites.

AMODIT in Polish Ministry of Sport and Tourism

Since 2011 Polish Ministry of Sport and Tourism is using AMODIT as a platform to gather applications for financing sport events and builing sport facilities. Number of organizations interested in getting such funds is above 30 000. Most people apply just a few days before deadline so it is every important to ensure high scalability and performance.

Applications forms are quite complex and can contain multiple subforms, tables etc. They are all defined using web browser. There are many restrictions defined as rules. So system checks validity of a form before it is sent to Ministry. 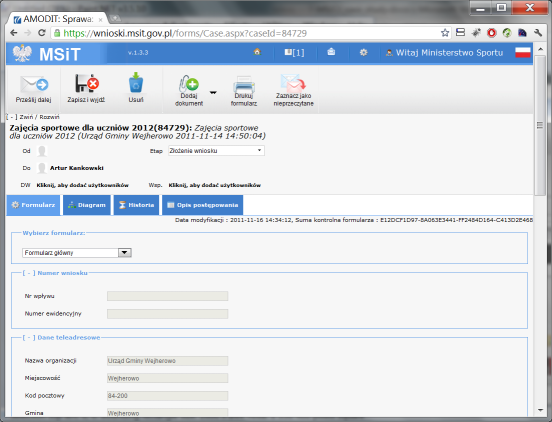 Forms are sent in electronic format but they can also be printed for archiving purposes. 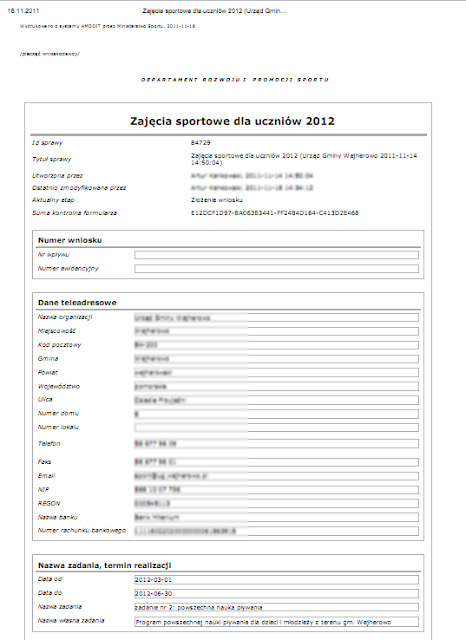 Important achievements of deployments are:

Collecting signatures and next step

Functionality of collecting signatures was present for some time already. But now it is extended with possibility to define what will happen if the whole process with finish with acceptance of rejection.
So from now on you can not only define who should sign the case (or part of it) and ask them one by one or at the same time. 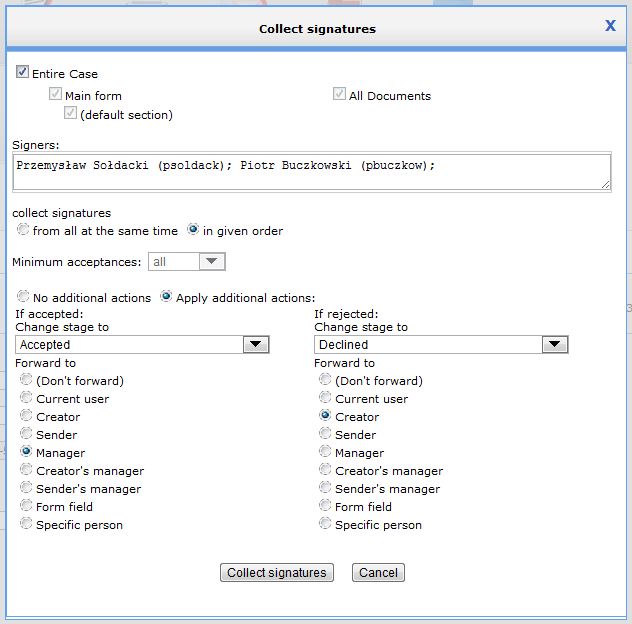 So now you can define processes of collecting signatures and define who will take care of it after signatures are collected. You can also define more sofisticated scenarios if you use rules, because you can define automatic rule which will fire on certain stage. So you have lots of options :)

There are situations when two separate cases in AMODIT are started for the same issue.
What can you do when you realize it?
First you can connect them. So they both "live" separately but they have links to each other.
Sometimes however it is better to have just one. You can simply just close one. But there is better options now.
You can merge two cases. Then documents and comments from one case (called sub case) are moved to the other. But history and form of sub case is lost. So this is especially useful if sub case have been just created.

Note: One of such situations is when cases are created automatically from incoming emails.

Among many new featues in AMODIT 1.6 there is something very useful to make forms more interactive.
You can define rules that are fired in background while editing forms.
They can be used for example to make some calculations in background. Or to set value of one field depending on combinations of value of other fields.
What is important you can use them also in tables. There are special "table rules" which will be fired for every row separately.
To achieve it you just need to tick a checkbox: 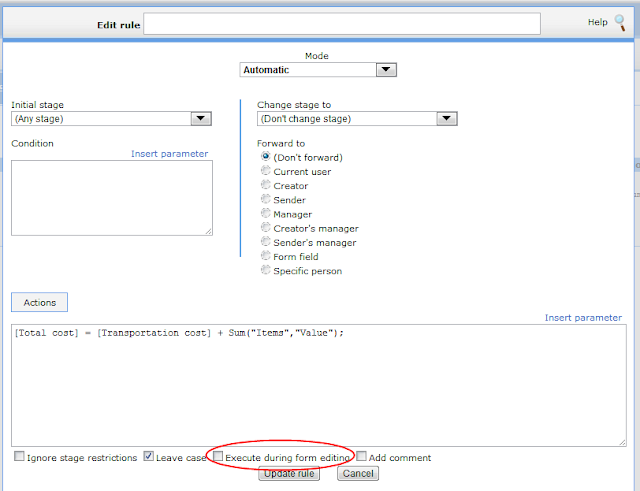 AMODIT in Academy of National Defence

Academy of National Defence have finished evaluation project with comparison of workflow systems. AMODIT and SharePoint were compared in area of modeling workflow processes.

As a result of this evaluation there were several advantages of AMODIT were indicated:

More information here: http://amodit.com/en/Case-Studies/AMODIT-in-Academy-Of-National-Defence.aspx
Author: Unknown at 10:56 AM No comments:

BMM is an IT company specializing in deployments and trainings. Even though they use several information systems, they decided to use AMODIT. We have managed to deploy several business processes:


Customer is satisfied what is confirmed by this testimony:
- "Implementation of AMODIT reduced time and workflow needed to handle business processes. The Management Board received a tool to control the flow of information and quickly access documents. "
- Andrzej Ciupa - Board Member, BMM
Author: Unknown at 11:51 AM No comments: 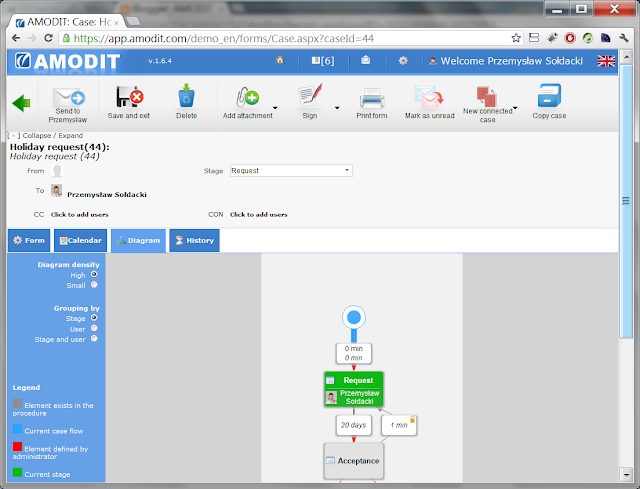 You can see concept animation here:

Email ThisBlogThis!Share to TwitterShare to FacebookShare to Pinterest
Labels demo

AMODIT had some e-email support before, which included:


But it did not cover situations when you want to move your whole email communication with customers into AMODIT. One of our customers wants to use it this way. So recently AMODIT has been extended with new functionalities which allow really rich support for e-mails.